In 2010, the Japanese tyre industry started the tyre labeling system applicable to replacement summer tyres for passenger vehicles ahead of all other countries in the world. General users can select fuel-efficient tyres1 with low rolling resistance while referring to the grades shown on the labels when they purchase tyres.

Tyres with lower rolling resistance have become more popular year by year thanks in part to this labeling system. JATMA conducted a survey to confirm the effect of reducing CO2 emissions through the widespread use of tyres with lower rolling resistance and published the results in 2015 and 2018. CO2 emissions were calculated for 2006, 2012 and 2016, before and after the labeling system started.

After that, we determined to conduct this kind of survey once every four years considering the product life cycle and other factors. This time, we summarized the CO2 emission reduction effect as a result of a survey of CO2 emissions in 2020.

Fig. 1 shows the rolling resistance coefficients of tyres that the member companies sold in Japan.

The charts show the ratios of the numbers of tyres sold according to the grading in the labeling system (Table 1).

Table 2 shows the average values weighted by the number of sold tyres for each tyre rolling resistance coefficient (RRC) level. The value in 2020 decreased by 0.2 N/kN (2.4%) from that in 2016 and decreased by 1.56 N/kN (15.9%) from that in 2006. Thus, the weighted average RRC has been continuously decreasing.

This survey targeted original equipment tyres and winter tyres that are not covered in the labeling system to evaluate CO2 emissions of all types of passenger car tyres.

The Reduction effect of CO2 emissions when tyres are in use

Note 2:(https://www.jatma.or.jp/environment_recycle/globalwarming.html) In this survey, the emissions in the past fiscal years were calculated based on the new guidelines (revised in March 2021), so the values differ from those published in the past.

Emissions throughout the entire service life of a single tyre. The calculation conditions (e.g., fuel economy and tyres’ contribution to fuel consumption) are not the average market values. They are the values measured on the vehicle in JATMA test and values calculated with those.

Although CO2 emissions per tyre have been continuously decreasing, CO2 emissions reduction in the Japanese market is moderate because the number of tyres sold in 2020 is 11.22 million less than in 2016 partly due to the impact of COVID-19. 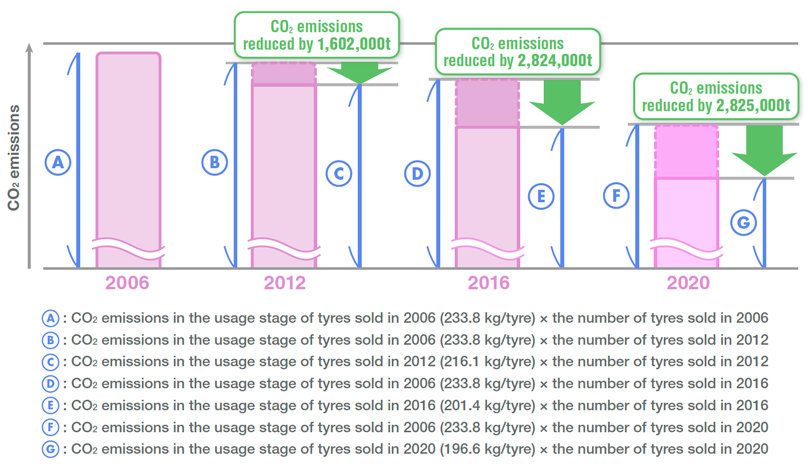 BKT Tires: the Weight of Quality

A seemingly simple question: how much does a tire weigh? BKT’s experience reveals how…

Tire and Rubber Association of Canada